All That Remains is an Act 2 main quest in Dragon Age II, revolving around the disappearance of Hawke's mother, Leandra.

Go to your estate; Gamlen is here but Leandra is not. She did not show up for their weekly meeting. Bodahn says she may be with her suitor who has sent her some white lilies.

After Gamlen leaves, Bodahn suggests searching for her in Lowtown at night after the streets empty out.

If Gascard DuPuis is alive, you can find him in Darktown. He states that the killer took Alessa not long after you confronted him at the estate, but he can perform a ritual using blood magic to track her right to the killer's lair.

Note: If Gascard DuPuis is dead (either killed by you or the City Guard) then Gamlen becomes your only option.

Meet Gamlen in Lowtown at night. Speak to the Urchin and either pay

Varric: friendship (+5) or intimidate him

Varric: rivalry (+5) to obtain information. Then follow the blood trail to the Dark Foundry entrance.

Note: If you take the long route around Lowtown starting at the Hanged Man, you can approach the foundry and trigger Hawke's dialogue regarding it, but you cannot enter it unless you actually follow and render every blood spot on the trail leading to the foundry door.

When you arrive at the foundry, follow the blood trail to a trapdoor, but do not be so hasty that you miss the lootable containers on the upper levels (the blood trail cuts around their locations, with one of the chests in the room to the left off the upper gangway).

If Gascard DuPuis is with you then he will not join in on any battles until you reach the killer, and his character model simply runs around and tends to get in the way of your targeting. He also offers no commentary on what you discover. Electricity and nature damage have the greatest effects on the shades encountered in here, but corpses are best handled by electricity, as they are immune to nature on Nightmare difficulty. Abominations can cause interruptions with their claw swipes, as can the shades if they deal enough damage, so avoid letting them secure multiple positions around a character at once. Beyond this, rage demons should be stunned or frozen before they can slip into the ground and deliver fiery backstabs. Depending on your abilities you may want to opt for stunning a cluster of Normal-ranked enemies instead before commanding the whole party to attack the rage demon at once.

As you battle through the area you will come across notes and an odd painting that begin to paint a picture of what's happening. Be sure to take Orichalcum and the Act 2 signature gloves (which are dependent on class) before you reach the final room.

Note: There is a Complex-ranked locked chest (30 Cunning to open, 150 XP) in the living quarters.

At the end of the next hallway, a cut scene plays where you confront the killer, Quentin, and see for yourself the disturbing results of his actions.

If Gascard is with you then he reveals his ulterior motives; Quentin was once his teacher in the art of necromancy, but refused to teach him all of what he knew. Gascard still intends to work with you to kill him and take his research notes, but Quentin will offer to "be the mentor [he] deserved" now that his "work" is finished. Gascard will, after some hesitation, accept and take the side of the killer against you unless:

During the fight, the killer will summon swarms of abominations, shades, and corpses, plus three "Possessions" of his victims in the form of desire demons. You must slay these in order for him to lower the shield he generates around himself, as Dispel Magic cannot remove it. Each Possession leads a wave of demons and undead, so the same tactics for one wave will work in the subsequent two. Retreating into the passageway upstairs should provide a decent place to use AoEs like Firestorm and/or Tempest, while giving you a buffer between slaying the third Possession and Quentin joining the battle properly. He is an Elite-ranked Blood Mage and should be stunned and slain before he can unleash a single Hemorrhage, as on most difficulties it can drain your party's life to nothing while healing him faster than he can be damaged. It is unlikely enemies will drop any loot during this battle, but if they do, they must be looted before the battle ends.

If Gascard joins Quentin, he is a Normal-ranked blood mage and should be killed immediately, before his additional Hemorrhages have influenced the fight too much. After that, the same strategy as not having him present or killed by Varric will apply.

If he stands with you, however, he casts Hemorrhages against the enemies and deals spirit damage, drawing a great deal of attention from them. Like all optional invincible allies his support is unnecessary, but on Nightmare difficulty, unlike other temporary allies, his support can actually make the fight more difficult. Not only will his attacks deal zero damage to the shades, desire demons, and Quentin, they will now deal friendly fire spirit damage to your party. Gascard's invincibility as an ally means the Hemorrhages won't stop, therefore your party can't attack from close range without putting themselves in grave danger, and this in turn means the desire demons have free reign to restore enemy health. The best, and in some cases the only, way to properly deal with this is to set all ranged allies on the ledge overlooking the pit (Gascard's Hemorrhages will not affect them from the level below) and use their best stuns on the desire demons and AoE attacks on the mob around Gascard. Set melee companions at the bottom of the stairs ready to take out any mobs that peel off to attack your mages and archers. Rogues can stun Gascard with Miasmic Flask and buy a few seconds to close in and dispatch the desire demons, but if Gascard doesn't have any targets left near him he will attempt to "help" by casting a Hemorrhage on whichever enemy is engaging you in melee range. Repeat for each wave and desire demon that spawns into the area. Gascard can damage corpses and abominations well enough, so focus your efforts on the shades. Aside from this, a Rune of Spirit Warding is the most viable defense against the Hemorrhages. When Quentin drops his barrier, his Hemorrhages can and will target your mages, so move them back downstairs. The student and teacher tend to cast dueling Hemorrhages on each other, creating a field that is impossible to cross. As they're both immune, they will deal no damage to each other and cast the fields infinitely, but Quentin will still recover health at a steady rate (indicating that the spell's health regeneration is separate from its damage), so he must be taken out from range. In short, Gascard's "help" makes the fight more difficult than it ought to be, but it can still be won in spite of him. 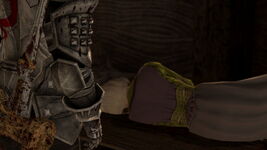 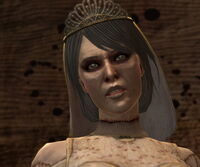 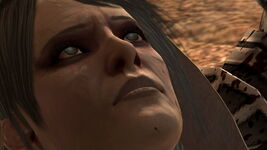