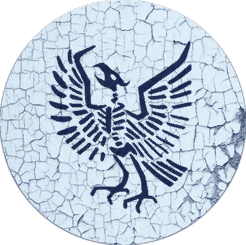 The Alamarri were one of the earliest human tribes, and the first humans to settle in south-eastern Thedas. They are the tribal ancestors of the Fereldans, the people who live in the nation of Ferelden. "Alamarri" is not a single tribe, but a loose coalition of tribes started by the Alamarri peoples. Besides the people of Ferelden, who are descended from the Clayne, there are the Avvar and the Chasind who exist in modern times.

In -2415 Ancient, the Alamarri crossed the Frostback Mountains and settled in the lands that would become known as Ferelden. According to their legends, they needed to find a new homeland because their previous territory was plagued by a being they refer to as a "shadow goddess." Scholars theorize the Alamarri were actually trying to escape from an unidentified natural disaster.[1] Solas claims that he has met this spirit during his travels, and that she currently dwells in the southern tundra.[2]

In -1815 Ancient, the Alamarri tribes living near what is known today as Lake Calenhad separated from the rest, becoming the Avvar.[3] They were led by Tyrdda Bright-Axe, who defeated another Alamarri leader, Thelm Gold-Handed. The Avvar left the plains in favour of the mountains.[4] Even after their separation, the Alamarri and the Avvar would sometimes form alliances. Maferath, an Avvar leader[5] who controlled much of what would become eastern Ferelden,[6] married Andraste, a daughter of an Alamarri chieftain. He led the combined Alamarri forces in the Exalted March against Tevinter.[7]

In -1415 Ancient, another group of the Alamarri broke away, forming the Chasind tribes. They settled in the Korcari Wilds[8] and quickly adapted to their new home. Chasind live in small tribes and cultivate shamanistic traditions.[9]

War with the Tevinter Imperium[]

Around -715 Ancient, the Tevinter Imperium launched several campaigns in an attempt to subjugate the Alamarri tribes in Ferelden. They eventually succeded and took control of the area for a time. The Imperial Highway was built across the Frostback Mountains, leading all the way to Ostagar.[11] Ostagar was abandoned during the First Blight when the Tevinter Imperium collapsed.[12]

In -620 Ancient the Tevinters established Emerius (now known as Kirkwall) across the sea from the Alamarri lands, as a slave trade hub. They again ventured into the Fereldan valley and often captured the locals, including the elves scattered in the area, but also humans such as Andraste and Radun.[13]

Though their lands were occupied by foreign powers, the tribes continued to fight with each other, for example in the Battle of Red Falls that took place in -355 Ancient.[14]. However, in -180 Ancient they united against the invaders. As one people, the "barbarian horde" consisting of various Alamarri clans such as Clayne, as well as Avvar and Ciriane tribes, crossed the Waking Sea.[15] The Imperium, weakened by the Blight, nearly fell to the force led by the former slave Andraste and the armies of her Avvar husband Maferath, and the elven slaves led by Shartan who joined the Alamarri side in -171 Ancient.[16] The Alamarri used the Tevinters' own Imperial Highway to lay waste to their lands all the way from Ostagar to Minrathous.[citation needed] However, concerned that their victories would be short-lived,[17] Maferath made a deal with Archon Hessarian. He allowed Andraste to be captured and executed,[18] in exchange for a truce and the lands that makes today's Ferelden, Orlais, Nevarra and the Free Marches.[19]

Maferath split the majority of the newly acquired territory among his three sons, while he continued to rule over the Fereldan part.[20] For their help during the Exalted Marches, he gave the elves the Dales to call their own.[21] However, Maferath started losing support when he would not let his army attack further into Tevinter territory to avenge the death of his wife. His own people completely abandoned him when Archon Hessarian converted to the Cult of the Maker and revealed that Maferath was a traitor who let Andraste die in exchange for the lands. He was overthrown by his sons.[22]

One of Maferath's sons, Evrion, was entrusted with the lands that would become the Free Marches.[23] At the time, this area was inhabited by nomadic people. Evrion was more concerned with spreading the words of his mother than ruling. When the truth of his father's betrayal came to light, Evrion and his children disavowed their lineage and renounced their control over their holdings.[24]

The youngest of Maferath's sons, Verald, was assigned to rule the central Planasene.[23] Verald based his claim on his ties to Andraste and Maferath, which backfired when the news of Maferath's betrayal spread. His entire court was murdered, though Verald himself managed to escape with his life and fled to Orlais.[24]

The eldest son, Isorath, was given the Ciriane lands to the west of the Fereldan Valley. He united the Ciriane tribes into one nation, which he called Orlais.[24] The Grand Unification happened in -155 Ancient.[25] Isorath was married to the Ciriane gyðja (female chieftain) Jeshavis, who began plotting to have her husband killed,[26] as she was angered by the upheaval caused by unifying Orlais. When Verald fled to Orlais, Jeshavis manipulated him into killing his older brother. Later, she married Verald, who wanted to legitimize his claim to the throne. Through Jeshavis' machinations, Verald was also killed, and the gyðja became the leader of Orlais.[24]

In 1:40 Divine, amidst the chaos of the Second Blight, an Alamarri warrior called Hafter united the tribes living in the Fertile Valley in order to drive back the darkspawn.[27] In 1:50 Divine, the Alamarri leader defeated the combined forces of the Chasind and Avvar who hoped to take advantage of the Blight and control the valley. Hafter was proclaimed the first teyrn of the Alamarri people.[28][29][30]

Since antiquity, powerful warlords known as "banns" had led the Alamarri in near constant struggle with their fellow tribes as each bann sought to widen his territory and influence.[31] The term "bann" dates at least as far back as the Towers Age.[32]

During the Towers Age the Chasind Wilders and other "terrible things" were led by Flemeth's daughters, the Witches of the Wilds. This force invaded the north and were all but unopposed until the hero Cormac led an army of Alamarri fighters and Orzammar dwarves. After a long series of dreadful battles, the Chasind were all but destroyed, and the witches burned. To this day the Fereldans eye the south warily, regarding the Chasind with suspicion and hatred.[33]

Other accounts say there was never a war between Flemeth and Cormac to begin with, nor a Chasind invasion at that time. Cormac led a brutal civil war against his own people under the pretense of rooting out an evil corruption amongst its nobility. The legend of Flemeth leading an army of Chasind Wilders to invade the Ferelden lowlands was a lie spread afterwards, presumably to be used as propaganda when the wars between the Alamarri and the Chasind eventually came.[34]

Since then, the Chasind have never left the swamps, nor have the Alamarri entered them. The Avvars took the hills as their land and the remaining Alamarri stayed in the Fereldan Valley and became known as "the lowlanders" to the Avvars and the "grasslanders" to the Chasind.[citation needed]

In 4:80 Black, the Orlesian Empire invaded the Fereldan valley for the first time by crossing the Frostback Mountains, hoping to take advantage of Ferelden's fractured state. By 4:83, the Fereldan teyrns had set aside their differences to push the Orlesians back in a united front. The Orlesians' hope of taking the port of Highever was dashed when the fortress of Redcliffe held out too long and winter in the Frostbacks cut off their supply lines. By the spring, most Orlesians had either pulled out or been captured.[35]

The tribe of Clayne eventually formed the kingdom of Ferelden under the rule of Calenhad Theirin in 5:42 Exalted,[36] over 400 years past Hafter's time.

The foreigners visiting Ferelden often remark that it smells of wet dogs.[37] True or not, one thing cannot be denied - Ferelden and dogs go together.[38] It's said that the mabari were bred by Tevinter mages but decided to stay in Alamarri lands after the Imperial occupation was ultimately driven back.[39] Ever since then, the mabari have had a strong presence in Fereldan lands. Many of the Alamarri tribes kept their own mabari, and the tradition was maintained by Fereldan nobles, many of whom claim ties to Hafter, the first teyrn, who was reputed to be the son of a werewolf.

Codex entry: The Keepers of Fear 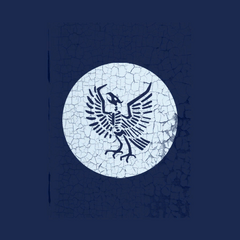 Found as a heraldry in Greagoir's family heirloom 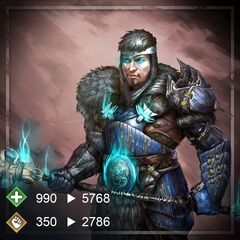 Promotional image of an Alamarri Warlord in Heroes of Dragon Age

Tier progression of an Alamarri Warlord in Heroes of Dragon Age