Adan says that he is somewhat reluctantly serving as a healer, as he sees himself as more of an alchemist who creates various types of potions. When asked why he is so cranky, he claims that he is not able to offer "comfort" to patients, unlike Mother Giselle.

According to Elan Ve'mal, he has at one point served the King of Ferelden and left said service "when there was no longer a king to serve".

Adan is responsible for the Apothecary where the Herald may upgrade and equip potions (though he is unable to upgrade them until the Herald brings him the apothecary notes found in the cabin west of Haven). Adan claims he helped the Herald recover from the effects of the Anchor following the Breach at the Temple of Sacred Ashes.

This section contains spoilers for:
Dragon Age: Inquisition.
During the assault of Haven, Adan becomes trapped with Minaeve under a burning cart in front of the apothecary. If the Herald fails to rescue him in time, the cart explodes and kills them both. If Adan survives, he will not serve as Skyhold's apothecary and can be found standing around in various locations. 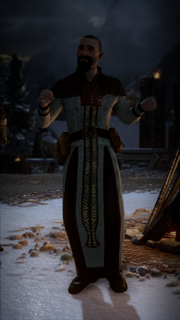 Dancing Adan, celebrating the closing of the Breach
Add a photo to this gallery
Retrieved from "https://dragonage.fandom.com/wiki/Adan?oldid=880944"
Community content is available under CC-BY-SA unless otherwise noted.