With passing years, the Western Approach became a wasteland and maintaining the keep became more and more expensive in the eyes of the visiting Warden-Commanders. The sacrifices of the order became a distant memory to the locals, who despite demon attacks on the area's population considered only the Grey Wardens themselves to truly be in danger from the thin Veil and the darkspawn crawling out of the Abyssal Rift. As personnel dwindled and the griffons no longer helped surveil the badlands, the Wardens ultimately pulled back in disgrace to Montsimmard. At the dawning of the Blessed Age, Adamant fortress was abandoned, having become a symbol of the Wardens' decline in the region.[2]

The only survivor who was found was a female human named Dabrissa.[3] 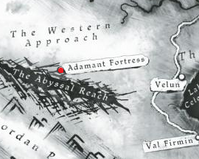 Map of the Adamant fortress
Adamant 1.png
The fortress of Adamant
Iron Bull at Adamant.jpg
Iron Bull overlooking renovations being done to the keep
Add a photo to this gallery

Retrieved from "https://dragonage.fandom.com/wiki/Adamant_Fortress?oldid=629470"
Community content is available under CC-BY-SA unless otherwise noted.