Adal Helmi is a member of noble House Helmi. She is the eldest daughter of Lady Helmi, who is the matriarch of the house. She is first encountered at The Nobles' Feast during the Dwarf Noble Origin.

She fights in the Provings honoring the first military commission of King Endrin Aeducan's second child. She is a warrior who favors a dual-wielding style of fighting, using what appear to be two daggers. If she fights a female Dwarf Noble, Adal will tell her right before the battle starts that she is an inspiration to all of those who live by the sword.

Adal can later be found in the Diamond Quarter, loitering near a building not far from the entrance. Although she prefers that Lord Pyral Harrowmont becomes king, she is willing to support Bhelen Aeducan should he become ruler. 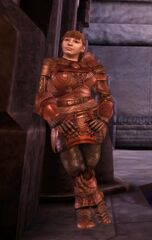 Adal Helmi loitering in the Diamond Quarter
Retrieved from "https://dragonage.fandom.com/wiki/Adal_Helmi?oldid=870078"
Community content is available under CC-BY-SA unless otherwise noted.