Edit
watch 01:54
Arcane: League of Legends - The Loop
Do you like this video?
Play Sound
“I will teach my child of humans like you. You're a light in this dark place.”

Adaia is the mother of the City Elf Warden.

Adaia is encountered in the dungeons of the Arl of Denerim as one of Commander Harwen Raleigh's many victims. She is grateful to be released, telling Leliana she is "wonderful" and "a light in this dark place." She also promises to teach her child about humans like Leliana.

By 9:30, Adaia has been dead for several years. She had been living in Denerim with her husband Cyrion and their child, whom she trained as either a warrior or a rogue. It is stated that Adaia came across as something of a trouble-maker. She was killed by humans, but no details are given. She is remembered by family friends Dilwyn and Gethon as 'beautiful and full of life... and a bit wild," and the City Elf Warden's features are compared to and contrasted with hers in their ambient dialogue.

If questioned, Duncan reveals that he attempted to recruit Adaia into the Grey Wardens, but was convinced by Valendrian that it was better for her to remain with her family. As there was no Blight at the time and thus no immediate need for recruits, Duncan acquiesced to Valendrian's wishes.

Adaia's old dagger, Fang, may be gifted to a City Elf Warden by Cyrion, depending on choices made during the City Elf Origin storyline and the Unrest in the Alienage quest. 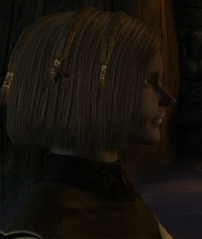