For the quest with the same name, see The Abyssal High Dragon.

Abyssal High Dragons have long been thought to be extinct, with the existing exemplars often being confused with Hunterhorn Shrikes or Stonejaws that migrated in the search for prey. Only recently has the return of this special sub-species of High Dragon been confirmed in the Western Approach. Their fiery breath is described as hotter than a forge.[1]

The hunting habits of Abyssal High Dragons are not documented very well. 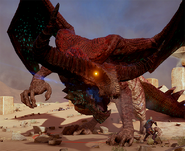 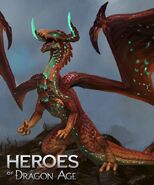 Retrieved from "https://dragonage.fandom.com/wiki/Abyssal_High_Dragon?oldid=857148"
Community content is available under CC-BY-SA unless otherwise noted.