“It's like you're trapped in your own body, seeing out your eyes, while someone else moves you like a puppet. And you're trying to scream, to move a single muscle, but there's no escape. Until you look down at the blood on your hands...[1]”

In the broadest sense of the term, "abomination" is sometimes used to refer to the demonic possession of mage corpses[2] or the product of merging a mage with a benevolent spirit.[6] The spirits can also possess almost any creature or object, including plants and rocks, however, these hosts cannot become abominations in the true sense, as the spirits gain no additional powers through possession.[7]

Abominations are rare and usually created when a weak mage enters the Fade and is exposed to a demon's influence,[2] such as during the ritual of Harrowing employed by the Circle of Magi. Mages who experiment with blood magic are more susceptible to demons and also risk becoming abominations.[8] It is not unheard of for Grey Warden mages trapped by darkspawn behind enemy lines with no hope of rescue or reinforcements to willingly surrender themselves to demons and become abominations in order to slay as many darkspawn as possible.[9] Malicious blood mages and demons in solid form are also able to summon demons into unwilling hosts.[10]

Once a demon possessed abomination is created, it will try to create more abominations.[2][3] While it is possible to free someone who has been possessed, this is rarely done due to the risks involved in such an attempt. One method involves an independent party entering the Fade and killing the dominating demon of the possessed.[11] Marethari Talas says that those who are freed in such a way never truly recover as the soul of the formerly possessed is scarred and describes the liberated host as a wounded animal that could easily fall prey to scavengers. The Avvar employ a ritual to release themselves from possession but this ritual involves a spirit voluntarily leaving its host rather than fighting off a demon. Aside from those listed, death of the host is the most convenient way to end possession. The mages who are not yet fully possessed can be saved by using the Litany of Adralla.[2]

The possession is not physical—the demon is still in the Fade, but so is the mage's spirit, and the demon is able to control the body through that captive spirit like a puppet. The demon channels its power through the body, sees through the mage's eyes and is able to use magic in ways the mage would have never imagined. However, the experience of entering the physical realm is overwhelming to the weaker demons, and abominations are often driven mad by the unfamiliar sensations, turning into monstrosities and going on a rampage.[4] The most powerful demons are able to adapt to the new form and even maintain the original physical shape of their host in particular, when the possession is accepted willingly. Some demons also have the ability of shapeshifting. The most common way to get an abomination to reveal its nature is to make it feel threatened so that the residing demon would impulsively defend its host.[12] The Avvar claim that the benevolent spirits they worship as gods watch for signs that an abomination has turned dangerous and will kill it in its sleep before it can endanger others.[13]

As stated, possession can occur with either a spirit or a demon and thus the possession experience varies. In some cultures across Thedas, mages deliberately seek out possession by spirits. Avvar apprentice mages allow themselves to become possessed by spirits to learn to control their magic, then release the spirit once they have mastered their talent.[14] The seers of Rivain, wise women who are in fact hedge mages, also communicate with spirits and allow themselves to become possessed.[15]

Demons attempt to dominate their host, and Anders describes his experience in extremes. When he loses control of Justice, he says it's like being "trapped in your own body, seeing out your eyes, while someone else moves you like a puppet. And you're trying to scream, to move a single muscle, but there's no escape. Until you look down at the blood on your hands..." In contrast, when Justice is fulfilled, he says, "I cannot tell you how good it feels for a spirit to fulfill its function. The waiting is over. I am finally seeking justice. And he is exultant. There is no ecstasy humankind can feel to match."

Wynne describes possession by a spirit as comforting—like feeling safe and loved. "It is like being held close, cradled... the bond is so complete that Wynne is unable to extricate herself, nor does Wynne wish to. "

Dragon Age: Dawn of the Seeker[]

Standard rage, hunger, sloth and desire abominations have exactly the same appearance and use the same pair of skills: 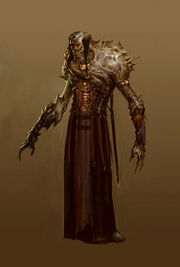 An Abomination in Heroes of Dragon Age 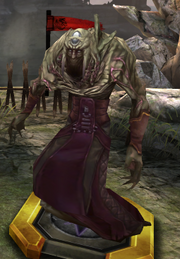 A Sloth Abomination in Heroes of Dragon Age 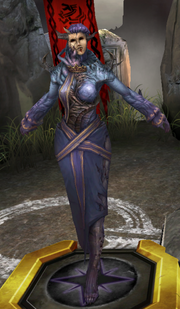 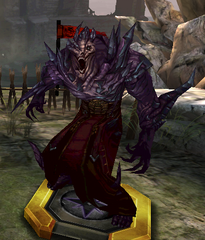 A Pride abomination in Heroes of Dragon Age 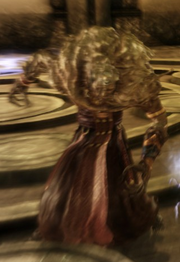 Slavren, an abomination encountered in the Mage Asunder