watch 03:03
The Loop (Games)
Do you like this video?
“The War had barely ended, and it was about to begin anew. But one war-weary young man wasn't about to let that happen. Me.”

Ser Aaron Hawthorne of Ferelden is a landless travelling Fereldan knight. He travels throughout Ferelden and solves various issues, spinning tales of his travels along the way.

The plot follows BioWare's own canon, meaning it may not follow some of the player's choices in the games.
This section contains spoilers for:
Dragon Age: Knight Errant.

Aaron was born in poverty in Portsmouth during the Orlesian occupation of Ferelden in 8:87 Blessed.[1] He started working at the docks when he was 6 years old. When he was 8, the Fereldan Rebellion reached Portsmouth, until then firmly under Orlesian control. Aaron wished to take up arms but was instead tasked with smuggling information to Maric Theirin. A poor thief and spy, he was caught when he was 9, but managed to defeat his captors in combat. Maric was impressed and made him a front-line fighter for the last five years of the war.[2]

At 15, Aaron was knighted by King Maric himself after helping to avoid further conflicts with Orlais following the Fereldan Rebellion. As all his family had died during the Orlesian occupation, and he had no lands of his own, Ser Aaron became a wandering knight.[3]

During the Fifth Blight, Ser Aaron was among the knights who fought alongside King Cailan in the Battle of Ostagar, and one of the few survivors.[3] There are conflicting stories regarding his role during the battle. Some say that he killed two ogres at once but remained trapped under their bodies until the battle was over, others that he drank too much on the eve of battle and missed the whole fight. According to his squire Vaea, he was with Loghain Mac Tir when he sounded the retreat but disobeyed the orders and raced into the battlefield on his own just in time to see King Cailan killed.[4]

Around 9:37 Dragon, while in Denerim, Ser Aaron fell in love with a woman who called herself Lady Elena. After her sudden disappearance, he went asking for her around the Denerim Market District, only to be told by Slim Couldry that the woman he was looking for was actually a failed actress and confidence artist named Olivia Pryde. Slim Couldry further revealed that they were partners in crime, that he would buy the items she stole from her marks, usually wealthy nobles, and resell them elsewhere. When he realized that Olivia had stolen from a landless knight, someone he considered one of his own, he returned the item, happy to shoulder the loss himself.

The day after his encounter with Slim Couldry, Ser Aaron left for the alienage of Edgehall. The city elves there were being treated harshly by Arl Gell Lendon. He had their vhenadahl cut down and burned in front of them; when a Dalish clan offered a sapling for a new tree, the Arl had it confiscated. Ser Aaron forced the Arl to stand down and ensured the tree was returned to the Edgehall alienage. King Alistair ordered the sapling not to be touched, to protect it. Even though the elves had not much to call their own, they still gave their all to Aaron as thanks. Aaron was so moved by the elves' kindness and generosity that he took one of the elves, a woman named Vaea, as a squire, in hopes her successes would be shared with her people as they travel from town to town, telling tales.[3]

Ser Aaron is invited to Kirkwall as a guest of honor of Varric Tethras, sometime after the latter's appointment as Viscount. At the banquet, Ser Aaron regales the guests with tales of his deeds.[3] After the feast, Ser Aaron returns to his room. Due to the viscount's very potent liquor, Vaea is unable to wake him from his sleep. Ser Nevin Faramore catches up to Vaea in the room, but is also unable to wake Ser Aaron. He wakes on his own in the morning, claiming to have slept like a baby, and tells Vaea that he's been invited to the birthday party of the Prince of Starkhaven and that they must leave immediately.

During the party in Starkhaven, Ser Aaron gets into a heated argument with Professor Cedric Marquette, whom he accuses of looting from dead cultures and being little better than a thief. In response, Marquette calls Aaron himself a thief, saying that there has been a rash of thefts across Thedas in his wake. Sebastian intervenes before things turn violent. When Aaron leaves the party in Varric's company for a walk, he tells him that he has heard nothing of thefts in his presence, but instead of generous donations to the poor. He also says that the reason he tells his stories is to remind people that every small action has a chance to make a real difference.

Upon returning to the party, he is once again confronted by Professor Marquette. Varric comes to his defense again, telling the Professor about Ser Aaron's loyal service to the kings of Ferelden, but the professor is unconvinced. Finally, Seneschal Granger intervenes, defending Ser Aaron's reputation but insinuating that Vaea is the true culprit. Granger points out that Vaea is not at the party, and that he will prove her guilt. When Granger later catches Vaea red-handed in Sebastian's chambers, Ser Aaron knocks him out but confronts Vaea about her activities with sword drawn. However, he reveals that he was aware of her thefts all along, and that he approved of them given her targets and the use she made of the stolen coin. He only wants to know why she's stealing from a ruler as well-loved as Sebastian. When Vaea discloses that she is acting under orders from the Inquisition, he expresses happiness that she has found a worthy cause.

Their conversation is interrupted by Cedric Marquette and a group of Tevinters. Ser Aaron orders Vaea to run with the journal and to start a new life while he engages the dozen Tevinters on his own. Soon after dealing with them, Seneschal Granger awakens and asks Ser Aaron to explain his actions and to hand over Vaea in order to avoid a diplomatic incident between Starkhaven and Ferelden. Ser Aaron confesses to the thefts and asks that Vaea be exonerated.

However, before Granger can take Ser Aaron to Sebastian, Vaea returns and hands over Cedric, claiming that Ser Aaron sent her to thwart Marquette's theft of the now missing journal. Granger remains skeptical but Sebastian is quite taken by her exploits and believes her story over Granger's objections. Vaea and Ser Aaron quickly leave Sebastian's palace before Marquette can wake up; Ser Aaron vowing to follow the journal's thief wherever they may lead. Ser Aaron remarks to Vaea that they will have to return the journal once they are done with it.

While leaving Starkhaven, Vaea reads the journal and discovers that some red lyrium may already be in the possession of the Tevinters. She agrees to go there to help the Inquisition with this matter. Ser Aaron intends to follow her as well, given his earlier promise to follow the journal's thief. As they depart, Vaea takes Ser Aaron's wine and throws it away, saying that his days as a drunk are over. The both of them then agree to help each other in their new adventure in Tevinter. Vaea remarks that Tevinter may not find Ser Aaron's stories of Fereldan glory as enthralling to which Ser Aaron counters that they are exceptional stories.

On their quest to recover the red lyrium that was stolen from Kirkwall, Ser Aaron and Vaea travel to the Tevinter city of Ventus, which is under imminent threat of Qunari invasion. While there, Ser Aaron meets with Magister Dorian Pavus, who assists in their mission to infiltrate the Qintara estate, where the red lyrium was supposedly taken. Shortly after, Ser Aaron runs into Olivia Pryde, the only woman he's ever loved, and a con artist who stole from him 7 years ago then disappeared. In exchange for his help getting Olivia and Calix out of trouble with Florian Invidus, another one of their marks, Ser Aaron recruits them for the Qintara mission. He tasks them with securing the floor plans to the Qintara estate, which Vaea needs to successfully break into the place.

They all return to the tavern to plan their next steps. Ser Aaron orders an ale, which Vaea drinks in his stead. When he overhears a conversation between Olivia and two Antivan Crows, where she demands they not kill or hurt anyone while providing them with a distraction, Ser Aaron takes it as a sign that Olivia does have morals. He tells her that she would have known Slim Couldry's feelings on nobility, which meant she knew he would return his pendant. The fact that she stole nothing from him is proof that she's more than a common thief. She replies that she is a thief, but not at all common.

After their successful mission at the Ventus Vault, Olivia decides to take Calix to bed, which prompts Ser Aaron to resume drinking. Drunk, he causes a scene at the tavern, which Vaea interrupts. When she expresses disappointment that he broke his promise to quit drinking, he replies that she's "not inspiration enough." Ser Aaron and Vaea's relationship remains strained the next morning. While Ser Aaron wants them to stick together so he can keep her safe, Vaea demands he stay out of her way while she works.

In the Qintara estate, Ser Aaron saves the life of Francesca Invidus, who had come to the estate to warn of intruders. Soon after, the invading Qunari break into the estate, with orders to kill Magister Qintara and anyone else in their way. Ser Aaron says that he can't fight them all, that not all of them would make it if he did. Olivia then volunteers to act as a distraction, playing the role of Magister Qintara while the rest of the group flees. Ser Aaron bids Olivia farewell, saying that he always knew she was a good woman. She replies that she's not, but can play the role of one. Outside the city, a despondent Ser Aaron tells Vaea that he pushed Olivia to be just heroic enough to die. He also apologizes to Vaea for his earlier behavior, saying that he only saw the world in black and white. She reaffirms her commitment to help him change, saying that she's "inspirational like that." 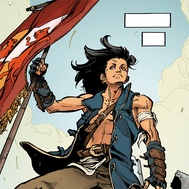 Ser Aaron as a youth, during the Fereldan Rebellion

Ser Aaron on the cover of Dragon Age: Knight Errant #3 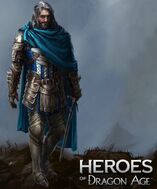 Retrieved from "https://dragonage.fandom.com/wiki/Aaron_Hawthorne?oldid=860108"
Community content is available under CC-BY-SA unless otherwise noted.