“You've heard about the war brewing to the south, I expect? Duncan is recruiting mages to join the king's army at Ostagar.”―First Enchanter Irving

A Mage of the Circle is a quest in Dragon Age: Origins. It is part of the Magi Origin questline.

Apprentice mages who survive their Harrowing become full members of the Circle of Magi. After having successfully completed your Harrowing, you wake up in bed the next morning to find your friend Jowan hovering over you. He's clearly concerned that he hasn't yet been called for his own Harrowing, but he tells you that First Enchanter Irving wants to see you and you'd better not keep him waiting.

Your goal is to make your way to the centre of the map and up to the Senior Mage Quarters on the second floor. There's nothing else that you need to do in the Apprentice Quarters, but you may want to explore a little for Codex entries and some loot.

Your destination is Irving's Study at the bottom of the map - again, while there's nothing else you need to do, you may want to take a bit of time to hear the gossip (rumours of a new Blight, an army gathering in Ostagar and a visiting Grey Warden among other things) and collect some Codex entries.

Codex entry: Mana and the Use of Magic

Codex entry: Hierarchy of the Circle

Codex entry: History of the Circle

Codex entry: The Fraternity of Enchanters

Codex entry: The Chant of Light: The Blight

Once the quest is complete and you're done questioning him, leave Duncan in the guest quarters to find Jowan lurking in the corridor. He wants to talk to you: this is the start of the next and final quest in the Mage Origin story, Bound in Blood and Magic.

Niall, an Enchanter of the Circle Tower 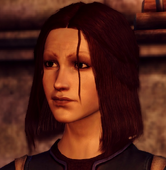 Keili, an apprentice mage who prays daily to the Maker to help her bear what she thinks of as the curse of her magic

Lily, an initiate of the Chantry

Meeting Duncan, a Grey Warden, along with Knight-Commander Greagoir and First Enchanter Irving

Owain, a tranquil mage and keeper of the Circle Tower's storeroom 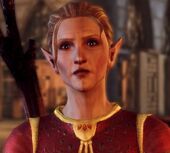