A Friend in Qarinus is a war table operation in Dragon Age: Inquisition.

Speak with Dorian at Skyhold.

According to Dorian, while most Tevinter magisters are not Venatori supporters, they will also not raise a finger to prevent the Venatori from wreaking havoc in the south. There are some, however, who see the cult for what it is, and are trying to expose it. A magister contact in Qarinus by the name of Maevaris Tilani is attempting to introduce a law in the Imperial Senate which would see Venatori activity sharply curtailed in Tevinter. Dorian suggests that quiet Inquisition support of Maevaris would be beneficial, and ultimately could drum up support from other magisters fearful of what Corypheus represents.

Note: The time listed is the time it takes with no agents.

I have contacts in Tevinter, although not many. Still, trading a few favors could help this magister a great deal.

Tevinter is a land where secrets are weapons. Let us arm this magister against those who would oppose her vote.

Not participating in this mission.

Considerable as your support has been, I'm saddened to report my motion died on the Senate floor... although I am hardly surprised. My fellows in the Magisterium don't enjoy the thought of having their "freedom" limited in any fashion. That was, however, hardly the point of the motion. It was a statement that needed to be made, and your support allowed me to make it far louder and clearer than I ever would have on my own. So I thank you. With any luck, this will draw support from those who feel as I do. It will also draw fire from Venatori cultists still in the shadows, but I say let them come. I will not back down in the face of such fools.

I'm sending along a few things which I hope will aid your efforts, and will see what more I can drum up. Give my love to Dorian. The poor boy is such a hothouse orchid, he must be wilting in the cold. 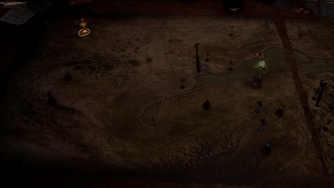 War Table location
Add a photo to this gallery
Retrieved from "https://dragonage.fandom.com/wiki/A_Friend_in_Qarinus?oldid=884857"
Community content is available under CC-BY-SA unless otherwise noted.