Hi! Welcome to the wiki! It's awesome to see someone excited about DA!

Just wanted to say hi and welcome you to the wiki, but also let you know that we reserve this space for posts with a topic, and don't allow posts like this that are considered low effort, so we're going to have to take it down. I don't want to discourage you from the wiki, but I do have to follow the guidelines, so please don't feel like it's personal. If you do want to keep this post up, maybe add a question or something that will spark a discussion to keep this from being low effort. Just some tips

We also have a Discord channel were you are able to post these things, here's the link of you want to join! https://discord.gg/eFNT43J

All that aside, welcome to the wiki, and enjoy your playthrough! Let us know if you have any questions!

A reply to The Forgotten Grey Warden
4

Alistair definitely. Morrigan is a very close second. I feel like the others aren't as important in the future games, and Alistair and Morrigan are definitely the predominant characters throughout the series. Plus, Alistair is sweet

A reply to Kalen Boies
1

I know right? So frustrating. I hope they fix it when DA4 comes out

A reply to Kalen Boies
0

I've been having troubles too, but not like that. I can't import anything from origins or unlock weapons and achievements and what not

Second photo, in the Vir Dirthara, the shattered library 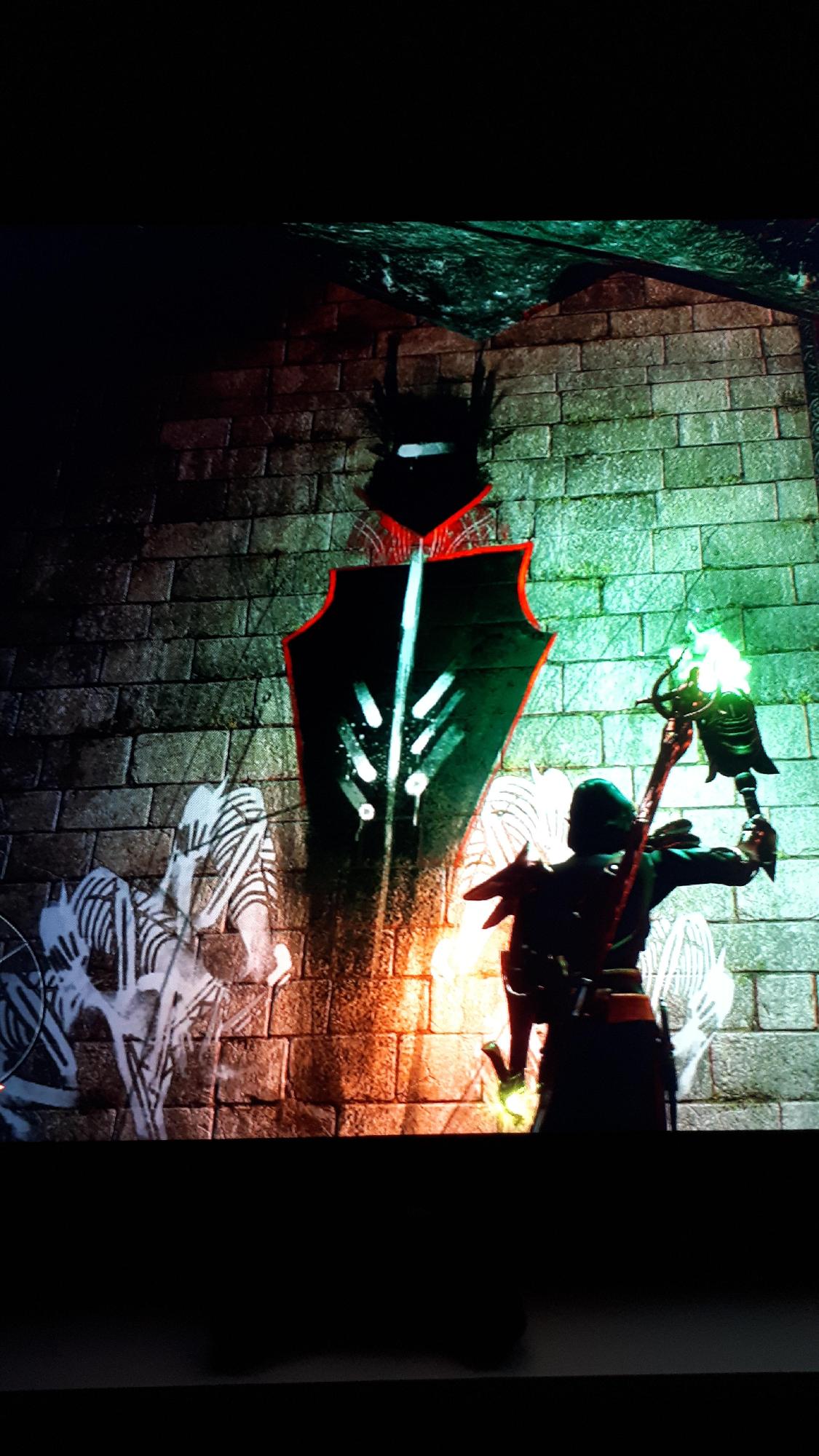 Okay so at first I thought it was a coincidence or just a design fault, but I've found this elven painting of what looks to be a Templar in Trespasser.

Could there have been something like Templars in the time of Arlathan? Or is this just an oversight?

First photo is in the Elven Mountain Ruins, when you first go through the Crossroads 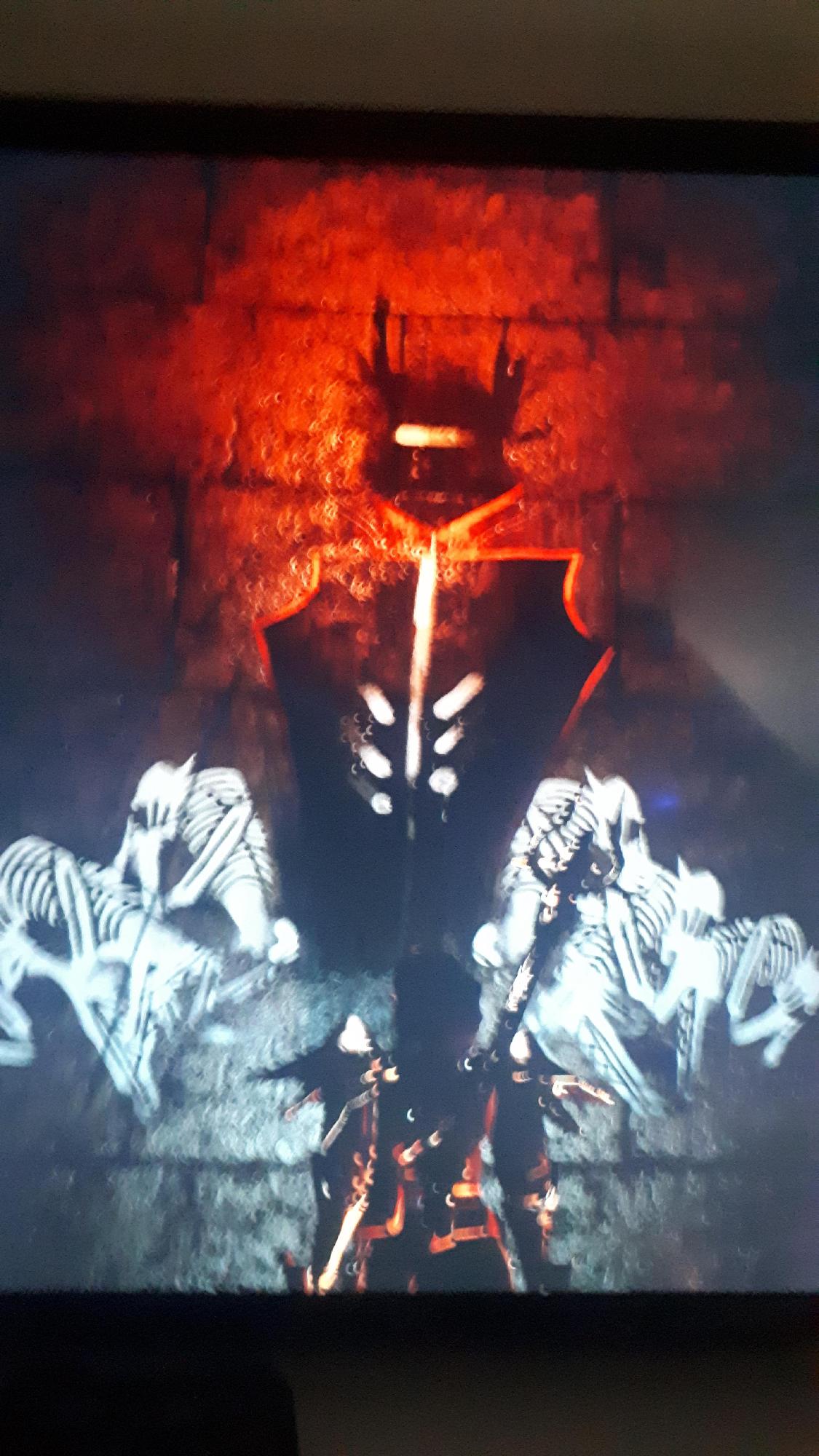 Is it just me, or is Cullen talking about calibrating the trebuchettes a shoutout to Garrus?

As you enter, Cole says that the place has "forgotten how to be". We also know, that thaigs should be naturally lit up, yet this one isn't.

Also, there is elven architecture throughout the thaig, including statues to Fen'Harel, so this could be the Lyrium mine they made once Mythal killed the Titan.

Could it be because of the death of the Titan?

Also, this probably explains why the Eluvian would lead to The Deep Roads in the first place.

Lastly, why would the Ancient Elves need Lyrium to begin with? There was no veil, and their magic didn't require Lyrium to strengthen their connection to The Fade, as there was no such thing as The Fade at the time. Was it the reason the Evanuris were so powerful to be "worshipped"? 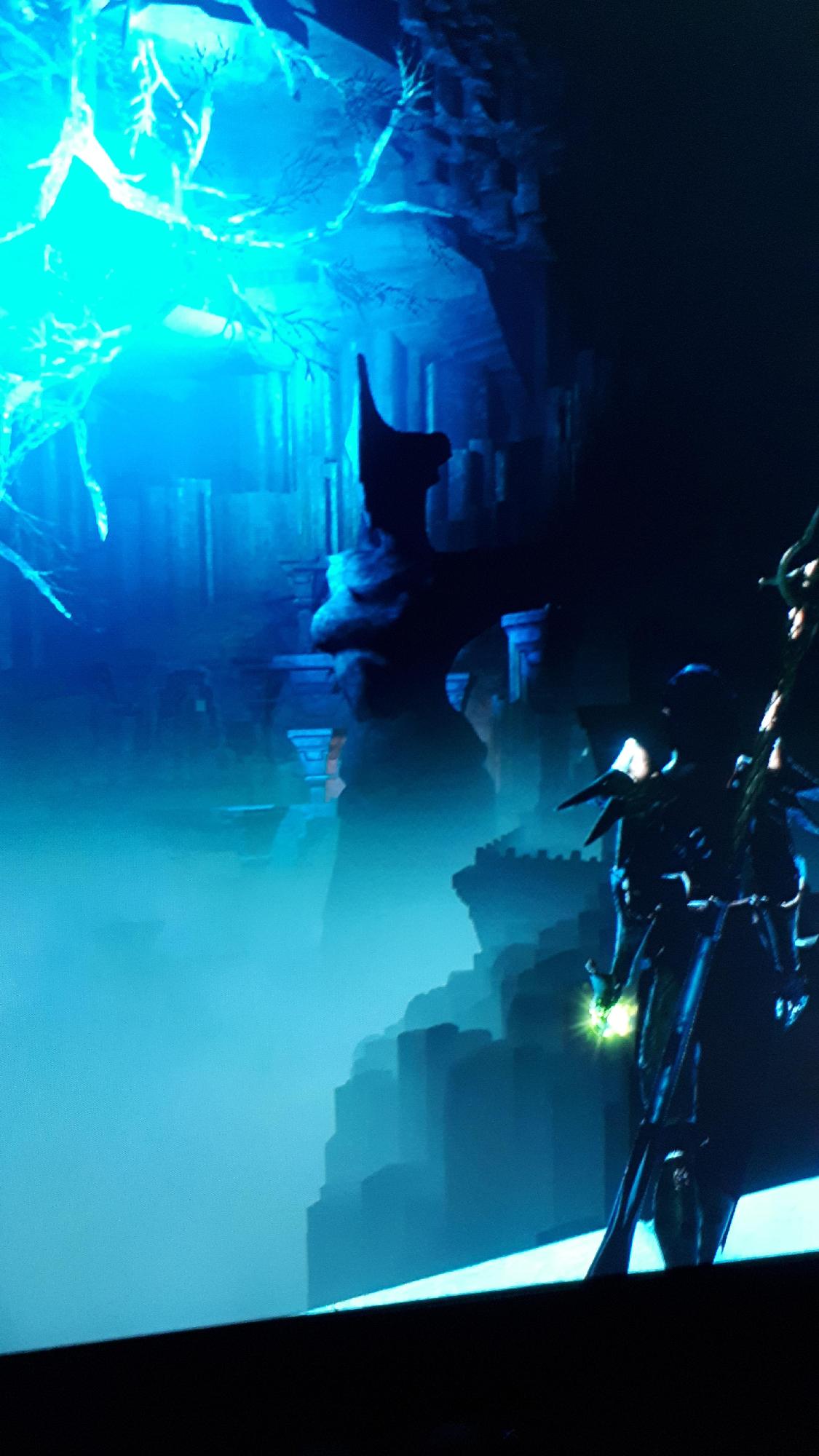 Hmm well make sure your court approval is still high, it doesn't need to be 100/100 but as long as it's at least 80 or above. When you're dancing with Florrianne, make sure you choose all the options that gain approval too, just in case. Other than that, it's mainly talking to Florrianne instead of killing her. There's no dialogue options for that part, so you don't need to worry. Good luck!

When you are faced with the choice to let Celene die or get attack her, choose the option to Talk to the Duchess instead, it'll give you the trophy

They might have repurposed it for Andraste. I'm not sure her disciples have knowledge let alone skill enough to create something like that. Or it could be that the structure itself is Elven, as it appears to be, but the inside was in fact built by Andraste's followers

The books and comics are BioWare's official Canon. So in their canon, Wynne isn't killed, I think Alistair becomes king alone, and other things.

I don't think they're actually Tevinter. Yes, they say in the game that they are Tevinter ruins, but if you compare them to the ruins in say, Tresspasser, the Aecitecture style in the Brecilian Forest ruins appear to be Elven. As does Ostagar. So it's very likely that Tevinter claimed it as theirs, and they're actually Elven in origin.

Also, the Gauntlet arcitecture looks that of Elven, whereas the Temple itself, doesn't. So it's also possible that the Gaunlet is elven, the Temple used to be, but was built over some Elven ruins or such

Hey guys I don't want to be rude but could we keep this on topic please? Thank you so much

I didn't notice much of a change really. Then again, I was going crazy over the mural so...

Yeah I would have, but it wouldn't be the only reason Leliana could become a Lyrium Ghost, or the Ashes have healing abilities beyond most mages

Sure but I don't think just Lyrium alone could do that without some sort of spell or something right? So I think it could be a mix of the amount if Lyrium, and something got to do with the Elvhen

That's a good point about the Red Lyrium being corrupted by Corypheus, didn't consider that while writing that haha.

I also had another thought whilst reading your comment.

Perhaps it was simply residual magic left by the Ancient Elvhen, and some of it seeped into Adraste's Ashes, giving them the power to heal Arm Eamon. It's entirely possible that's how the Guardian was there, as well as all the other parts of the gauntlet. And also how Leliana came back to life.

Andaran Atish'an everyone! Good to see you all again!

So I noticed something when fighting Corypheus at the Temple of Sacred Ashes in the finale. When he raises the Temple, some parts are destroyed, or at least, wrecked. It appears that under where the Inquisitor is standing (in the photo), there is a mural which depicts Mythal.

Now we all know the Elvhen empire spanned across all of Thedas, and it isn't uncommon for human structures to be build over Ancient Elvhen structures. But this has has a few implication.

One specific on that comes to mind is Leliana's supposed death, and how she could have been resurrected. Could it have been residual Elvhen magic? Could she not be a Lyrium Ghost?

Another question is what that place could have been before the Temple of Sacred Ashes? And why was there Red Lyrium beneath an Elvhen temple, one possibly dedicated to Mythal?

Sorry if this has already been addressed and discussed 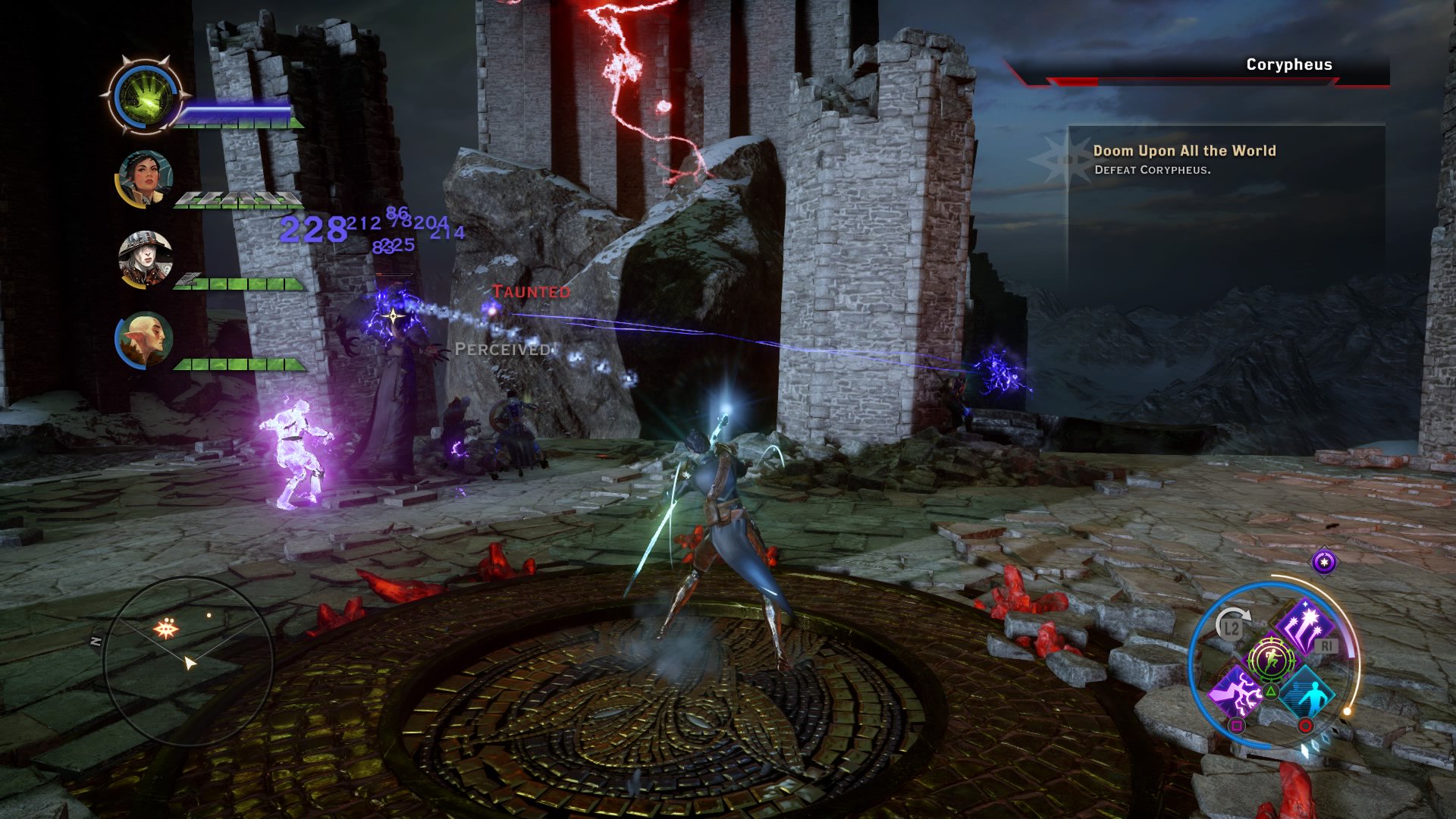 Thanks so much! I hope it gets fixed soon, I need my Staff! Heheh