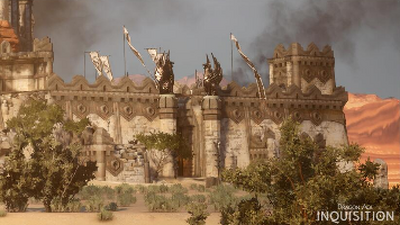 Here Lies the Abyss is a main quest in Dragon Age: Inquisition. Varric has a friend named Hawke, who fought Corypheus once before and now fears Grey Wardens are under the influence of the ancient darkspawn. Hawke has a Warden contact who may be able to say more. The quest plays out across... 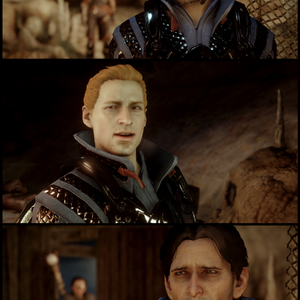 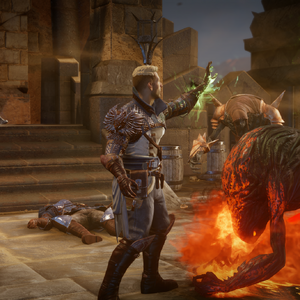 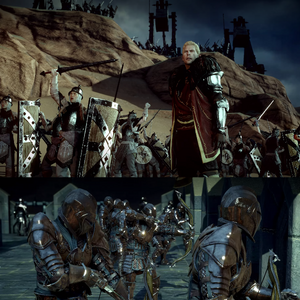 Yes, I know this needs some explanation, then here I go...

There is something that's always in my head when I think about the third game. I noticed it when I was playing DA:I for the first time, at "Here lies the abyss", more precisely at the moment in the Fade. At a certain point, you have to fight some fearlings, that have the apperance of spiders and names like "Mages", "Templars", "The Blight", and so on.

It's everything ok until you get in a moment when some other spiders appear, and one of them is different. It's called "Maker". But it's not only that, because it doesn't attack you if you don't. I've checked it in other two playthroughs and it happened again.

Not only that, but it interacts with a magical barrier in the fade (I don't remember, but this "Maker" either damages it or restores it). And you have to destroy it to go on in the mission.

What makes me crazy is the fact that it happens in the Fade, where the Maker already was, because of the Golden City, (as the Chantry teaches us, of course), then IT IS possible that the Maker was in the Fade while those 6 mortals entered physically on it. That's no small achievement, and last time it happened the Golden City was blackened and that whole story we already know. Then it would call His attention, right?

And WHY the developers did that?? Early at the quest, you have to fight some other enemies with names that have a narrative contribution, but why the Maker? And why TF it acts differently?

What breaks all this thing is the fact that you have to fight this spider, and it is no big deal, but is still explodes my head everytime I think about it.

I've never seen anyone talking about this (maybe because it's stupidly specific or I didn't searched enough), but I'd like to listen someone's thoughts about this. Also, have anyone noticed that too?

(There is one for each character/warden/hawke, if you can't remember them I'd suggest just looking up a youtube video on it (There's a good one by FluffyNinjaLlama))

I'd like to see which one is your favourite and why, or if you could create one for a HoF/Hawke/Inquisitor or any other character/companion. My personal favourites are: Alistair, Solas, Blackwall and Varric.

(Alistair) "Did the King's b**t**d think he could prove himself? It's far too late for that. Your whole life, you've left everything to more capable hands. The Archdemon, the Throne of Fereldan… Who will you hide behind now?" I really love this one as it is something that is brought up in Origins (Alistair feeling like he can't live up to his destiny/believing he can't lead or do anything). It ties into his character, although I would have enjoyed to see a bit about the HoF (dependent on your world state).

(Solas) "Dirth ma, Harellan. Ma banal, enasalin, Mar solas ena mar din. (Tell me, Trickster. Did your victory amount to anything? Your pride will be your death.)" This means a whole lot more after Trespasser, his 'victory' will be undone if he goes through with his plan. Destroying the veil could kill him; proving the Nightmare right- His pride (for himself, and the elves) will be his death.

(Varric) "Once again, Hawke is in danger because of you, Varric. You found the red lyrium. You brought Hawke here..." I think this one is a generally good one, again one of my favourites, as it doesn't focus on one fear; it does two. First Hawke, Varric literally lies to Cassandra about Hawke's whereabouts to protect Hawke. I feel like he almost believes he has too, in some sense. Second, red lyrium, most of the 2nd game could have been prevented had they not found the idol and I think Varric blames himself partly for the events of Kirkwall.

I have wondered for a long time:

In case you leave Hawke in the Fade, did Varric know that you have the last word on the decision?

Judging from his reaction, it is pretty obvious that he doesn't have a clue.

But if that is the case, as friends, this would be a shocking fact. How do you think we would react if he knew? Would you tell him?

So i made an elf in the game started romancing Solas Everything was fine. I got he's quset All new, Faded for her i finished the quest then i talked with him back in skyhold. I got he's tea cut scene kiss on balcony and all before that so i finished the wicked eye's and wicked heart's, Here lies the abyss and i didn't got any cut scene from him is that normal or i'am doing something wrong? I tried to search it on interner but i couldn't find any solution sorry for my bad english.

So, I recently created an account for the Dragon Age fandom because well, it's a favorite of mine. But since I'm currently doing a completionist run of Dragon Age: Inquisition It's natural I have come up with a few theories.

First of all this is filled with spoilers. Stop reading here.

The first thing that I see a lot of people overlooking is Leliana's death in Dragon Age Keep, when you talk to her she mentions dying but I want to bring up what no one else has seemed to bring up: Wynne and Cole, starting with Wynne who has some idea but not an exact measure of being brought back. Cole is a spirit of Compassion and has assumed the form of a human - At the end of DAI Leliana speaks of how she is free until she is needed again implying much like a spirit that she is bound to this world by a cause. Now there are many theories, Andraste, Flemeth, Mythal, The Ashes, but there is a noticable trend outside blood magic that those who die come back as a spirit or someone who takes the form of them i.e the Divine Justinia herself assumes mortal form in the fade during Here Lies the Abyss. Preferably I would like to think Leliana is in the world of being dead - A spirit, Cole is very naive but take someone who is experienced and has a goal, an expert bard and master of espionage. She could be a spirit - And you would never even know. Another thing, notice how gaunt... dare I say 'ghoulish' Leliana looks in the future of Redcliffe, almost like she wasn't human. But that's a small tie at best.

My last theory, albeit with holes here is on Solas - Gathering up 'everything' and I mean 'Everything' he has said throughout DAI and the DLC - Being Fen'harel and the such, the ancient eluvian's of old. Technically, as Mythal or Flemeth would not know but Fen'Harel who has been there since the age of the gods and even interacted - was one like it or not - Solas is the only one in the game of current who would know if the stories of Andraste were true and whether Corypheus was speaking truth on seeing the gods: Because he was alive around that time, even before then, before the Tevinter even claimed all to the point of being there so long ago that he witnessed the civil war of elves. Now, the big hole here is that he could've been sleeping but questionably, if the Herald could find where Andraste has been - Could he not sleep there and find out for himself anyways?