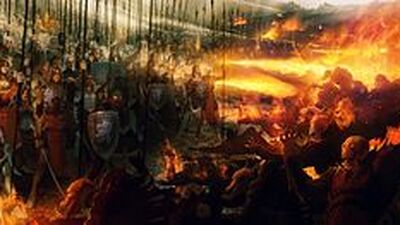 A Blight refers to a period when darkspawn find and corrupt one of the Old Gods—ancient draconic creatures slumbering in the depths of the earth—, which is transformed into an Archdemon and leads the horde to attack the surface world. The world has seen five Blights to date; as Dragon Age...

At the end of the inquisition, whether we banished or allied with the wardens or not, we are shown that there is a glimpse of possible civil war brewing in Anderfels. It would seem that some of the causes of this fracture are reclusiveness of the Grey Wardens and their political intrigues such as their interest in how the warden commander of Ferelden owns the vigil's keep and surroundings (and possibly having a warden as a king.)

Then I wondered who would be the warden that would ultimately lead this revolution? Could it Warden, Alistair, Loghain or Stroud? The most plausible one would be Alistair or Loghain as they are both veterans of 5th Blight and have shown themselves during the inquisition. I always hope for the return of the Warden but given how he is treated only as codexes, letters and some mentions in past two games show that he will not likely to be presented at all (I hope that they just make DLC or something for Dragon Age: Origins as a fan service like going to the west or looking for vigilance again.) Stroud is... Stroud. I did not know he even existed until I saw his page in this wiki. Or some non-specific person like a new warden commander of Ferelden from the Last Flight.

So what're your thoughts? Will there be actually a civil war that would affect the upcoming game? Or maybe it could be a plot for a far-future since there is already a rumor of 6th blight in the North(from Origins) and no message from Weisshaupt?