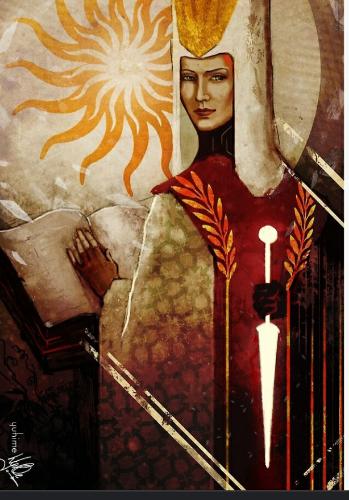 I think, the College of Enchanters can handle the question – and I don't think, the mages want another witch hunt. And don't forget: Vivienne also establish the new Circles – but yet: they can't be a prison. (I just don't like her as the leader, because this half-sentence in the epilogue, that she plays with the mages' fears well to gain to her little Circles political power. Playing with people's fear for political advantage is always bad.)

@CaiusGermanicus Yeah, I disliked that part too. I get that it was done to streamline the possible worldstates, but in doing so, they made Vivienne a massive hypocrite.

Instead of joining the new Divine-approved College and helping to work out a new system that works for both mages and non-mages alike, she resurrects the Circle and adds more tension into the mix, with people now possibly fearing an inter-mage conflict.

For all her fancy rethoric about how mages have to make sacrifices for the greater good, she sure was quick to throw that out the window for her shiny Grand Enchanter title.

@FlamesOfChaos13 Mostly so they all three cause a conflict and then BIoWare only needs to change something superficial about what's going on. Makes the choices easier to integrate into future games

@Morgan21590 I think she just views the College as took weak and not strict enough. Also she wants power. She the master of different layers of reasoning.

@Photophobia21 To be fair, Leliana does have a gap between the end of DAI and Trespasser so it's not ALL at once. It's one big lump at first and then another big lump 2 years later.

<<I was also glad to see that the Circles did re-form, given we know from Asunder and DAI both that many mages actually wanted the Circles, and that there were a lot of angry mobs targeting them without the Circles.>>

Eh, they do not know much about alternatives anyway, being never much encouraged to think much about them. I sense Stockholm. As for the second part, well, nice move from the Chantry's opinion builders to promote alienation and hate for centuries so they could step in and claim to save the mages. TL:DR: BS argument.

<<Vivienne, I like best when looking at mage rights. The College of Enchanters still exists, the Circles are reformed,>>

Well, when looking at the epilogues, well, yes you could say it exists, but just barely and it is pretty clear to me that Vivvy would not have much issue exterminating them.

"The reaction from the new Divine is instantaneous: a war to dissolve the College before it begins.

Some mages surrender; others return to the Inquisition. Either way, the new Circle of Magi stands triumphant." (Base game)

"She grudgingly allowed them to remain as the College of Enchanters, as a mark of her regard for the Inquisition. For the next few years, the College and the Circle coexisted peacefully, if barely." (Trespasser)

It is also quite surprising that people like to propose being "pro-mage" while than harping on the claimed necessity of the exact same old structures instead of considering new attempts (of mages) to band together.

<<they made Vivienne a massive hypocrite.>>

Nah, she was a hypocrite from the get-go. You nailed it pretty well,

<<For all her fancy rethoric about how mages have to make sacrifices for the greater good, she sure was quick to throw that out the window for her shiny Grand Enchanter title.>>

but she's basically "Everyone back to the circles, expect me, 'cause I'm special." from the get-go.

@Buckeldemon , I'd rather you not call my opinions BS, but that's about civility. Given that many Circles, mages could leave for short or long periods of time, I think the mages who wanted the Circles back should have their opinions respected. They have choices post-Trespasser. Especially given the comments you get at several points in DAI, it's clear many Circles were quite cushy.

As to the second, those mobs tended to form from a) magic manifesting in very violent and destructive ways, b) mages behaving badly (see: Anders, which was NOT designed to get public support at ALL, or the mages in Witchwood all 'we will rule over the sheep' and killing wagons full of children with lightning bolts).

Circles were created by both the Chantry and the mages discussing and negotiating matters, and most Circles were fairly open for Harrowed mages pre-Anders. At that point, there was more hostility and tension all around, and new measures put in place. Is some of it irrational fear? Sure. But we have so many examples, from Connor to Adrian to Anders, to Tevinter of magic handled poorly that even that fear might come from having heard things that are true.

I don't expect to convince you, but please be respectful even if you disagree.

My Warden asked the guard, open the door, he refused. That means: the Circles weren't open. What is that "fairly"? I think, it's open or not.

Also: it was declared in Origins, this is PRISON. Narratively was declared, not as some Libertarian's opinion. This is canon.

Also: How is Anders blameable for the cruelty of the system?

Collective punishment is evil. There's no other word to describe it. Because of this serves one goal: to DIVIDE people, with keep them in fear, to keep away every trust. To break the person, and to separate people with distrust. This is blackmail – the worst one.

And the Circle was always about it. Even "pre-Anders".

Thinking about the Circle it was good to the mages is false. Captivity is never good to the captives.

<<I'd rather you not call my opinions BS, but that's about civility.>>

Probably wrong choice of phrasing, sure. Though it is not lost on me that some of my own opinions (usually those in disagreement with Chantry viewpoints) have been called BS in recent times as well (not by you anyway), so I might be a tad bit over-sensitive here.

In any case, if one wants to justifiy the existence of circles in the traditional sense by "they do not know it different, so that's for their own good", one might as well justify the continued existence of slavery, as slaves are just as commonly discouraged to think about on how they could survive without depending on their masters.

<<Given that many Circles, mages could leave for short or long periods of time, I think the mages who wanted the Circles back should have their opinions respected.>>

That comes across justification cooked up by those wanting the circles to stay in their traditional sense, for whatever reason. I'm reasonably sure that mages would, despite all the benefits of banding together, like to have the chance to have an informed choice as opposed to Vivienne's fear-abuse and the traditional "Join-us-or-die!"-character of the circles (and she does not change that).

<<As to the second, those mobs tended to form from a) magic manifesting in very violent and destructive ways, b) mages behaving badly (see: Anders, which was NOT designed to get public support at ALL, or the mages in Witchwood all 'we will rule over the sheep' and killing wagons full of children with lightning bolts).>>

Wagons full of what? Ah, you mean the people who got robbed (and sometimes raped) by the rogue templars before or after?

"We will rule over sheep" is mirrored nicely by Cullen's charming "We rule over the mages by divine right". Also, most of the time these "apostates" direct their hate at the tamplars and non-mages ignorantly acting on what they were told. I see these things as the result of the "us-vs.-them" mentality between both mages and templars and mages and the general populace that the Chantry has nurtured over the ages.

<<Circles were created by both the Chantry and the mages discussing and negotiating matters,>>

Where does that come from? From what I could glean from the murky first-Inqisition-time records is that the Chantry and the first Inquisition apparently created the circles/Nevarran Accord, even before that one Divine almost exalted-marched her own cathedral. I doubt that all mages at the time felt represented or even knew of these negotioations, to say nothing about the supposed viewpoints of the Inquisition itself.