So i have just finished my 5th playthrough of Inquisition and when i was judging Samson, he said some things that i never noticed before but caught my attention. He spoke of his actions as though he were doing the corrupted Templars a favor, i believe his quote was, "better to die than to become a monster and be forced to kill until you are killed." im paraphrasing this line of course, but i cant help but feel a little bit of sympathy for Samson and the Red Templars. After all the main body of the order were just following orders as any good soldier would with the the Red Lyrium clouding their judgement, and to me at least, Samson most likely felt let down by the order he dedicated his life to and found purpose with Corypheus. this of course does NOT excuse the actions of the Red Templars but it does give me a different perspective on them as most of them suffer constantly with the wounded Templar in Suledin Keep expressing his wishes to remove the Red Lyrium's hold over him but stuck with it to avoid being tormented by Imshael. Let me know what your thoughts are given the info i've presented and any info you have found on your own. 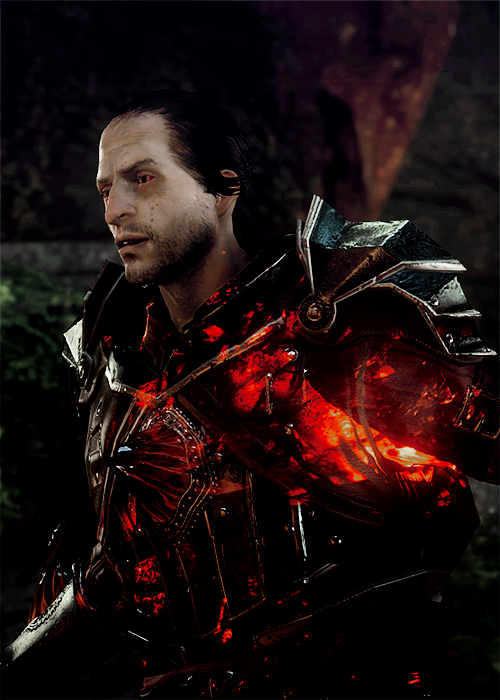 ^Oh I agree, he's worse. I was just trying to make a devil's advocate argument. Even if his actions are twisted into the best possible interpretation, he's still at least as bad as the Chantry.

For me, Samson has a sad, pathetic and pitiful side. The "being used and threw away like a trash once you're too damaged" by the Chantry is truly horrible.

But what Samson did... It was'nt so different, except that instead of being abandonned and forgotten, they became killer monsters. Even if he thought it was a better fate than the normal Templar's end, he lied about it to his templars. And that so wrong.

At least Venatori seemed like crazy volonteers tevinters (if I not wrong) well, except for slave's sacrifices.

Samson wanted another fate for Templars, watch the Chantry burn, have his revenge and Corypheus used that.

^I felt bad for Samson in DA 2. But by Inquisition his deeds and intentions removed any pity I had for him. I'm not going to waste my sympathy on someone doesn't deserve it.

Samson was a bitter old addict who wanted nothing more than his next fix of lyrium and to stick it to the Chantry. When the order had its sloppy meltdown, Samson bought an unlimited supply of red lyrium from Corypheus with the lives of those abandoned templars who turned to him to try to cope with their Chantry-imposed issues. Along with feeding his addiction, Corypheus stroked Samson's selfish ego, and made him 'Somebody Important' again. Samson willingly watched his fellow soldiers turned into monsters simply to get his fix and told himself and them that it was for them - so they would die on their feet as righteous soldiers for a cause. What a load of halla muffins. I might have had a shred of sympathy for him initially for being tossed out of the order simply for smuggling letters between Maddox and his sweetheart (if that's all it was), but none for the scumbag who lied to himself and his people just to have his hate confirmed, to feel important again, and to sate his own selfish addiction.

Sampson was ruined and abandoned by the order he dedicated his life to. He swallowed their BS hook line and sinker. They got him hooked on Lyrium and made him to horrible things in the name of “god.” And it change him. When he started asking questions he was discharged and left to rot. I’d be angry too.

Depending on Hawkes decisions he either re-joined the Templar’s or continued a life of poverty. Either way he was hooked on lyrium shackled to the chantry and sick of being used. I can’t understand why he did what he did. And I can see why the other templars would have followed him. I don’t think he was evil. Just a broken, bitter old man looking for answers and maybe a bit of revenge. Corypheus played him told him everything he wanted to hear. He convinced key members of the order to follow him and that was that.

Also it’s not as if the inquisition doesn’t have the blood of thousands on its hands. My inquisitor’s kill rate was easily I’m the hundreds. Not all of them were evil either.

^Whataboutism. This thread isn't about how evil the Inquisition is or isn't.

It’s not about who’s evil. It’s about not dealing in absolutes.

^Which is also whataboutism. The topic isn't about whether or not there's pure evil, it's about Samson.

^I'm aware of that. I gave my opinion. I was merely pointing out that Pppopopooio was performing whataboutism when he tried to shift the conversation from Samson to the Inquisition, or about "not in dealing absolutes" or however he wants to label his misdirection.