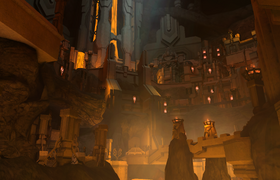 According to the dwarven history, the dwarven empire once spread across all of Thedas, and that the underground city-fortresses called thaigs were almost beyond counting. Kal-Sharok was the capital then, home to all the noble houses, and Orzammar was simply the home of the miner and smith castes.

It is an awe–inspiring sight, a great city of stone standing within a vast cavern, poised over a sea of molten lava. There the forges ring loudest, and the finest smiths create works that are the envy of all races. Countless thaigs were lost in the First Blight, when the darkspawn poured out of the Deep Roads like smoke. With each generation, more of the Deep Roads had to be sealed, more thaigs lost forever. Now only Orzammar stands—the last bastion of the dwarven race and its finest creation.[1]

Orzammar, its last remaining sister-city of Kal-Sharok and Kal'Hirol, are considered "great thaigs", as opposed to the numerous other thaigs as they were once the main centers of the dwarven empire.

Orzammar Diamond Quarter is the home to the very pinnacle of dwarven society, the Noble caste and the Royal family. It is, also, the highest point in Orzammar, looking down upon the rest of the city. The many halls here contain the most important aspects of dwarven society and is not often seen by those of other castes. On some occasions, however, a select few of the Merchant caste are allowed to set up stalls here and sell their wares directly to the nobles.

The Royal Palace, home to the House Aeducan's own Prince Bhelen Aeducan, sits here as does the estate of Lord Pyral Harrowmont. The Assembly resides next to the Palace, the home of Orzammar's bitter political battles. For those few outsiders engaging in diplomatic relations, a ceremonial Key to the City awaits, should they take it upon themselves to learn more of dwarven culture. The Shaperate lies next to the Assembly, the literal memories of the Dwarven society. If it is not recorded within the Shaperate, it is either completely unknown, misplaced in the Deep Roads or outright ignored.

This is the starting point for the Dwarf Noble Origin. Orzammar merchants are here for a time being, but you cannot go anywhere else other than the Proving Grounds.

The home to the working classes of Orzammar, particularly those of the Merchant Caste. It is where they, and those permitted from the Surface dwarves, peddle their wares. It is a respectable and well maintained sector, a far cry from the destitution of Dust Town, playing host to the Proving Grounds.

The Proving Grounds are the home of the honourable dwarven gladatorial contests known simply as "The Provings". While these Provings are often the sole preserve of dwarven honour and politics, adventerous outsiders with more "exotic" fighting styles can seek out certain parties and participate in matches with young, glory-hungry nobles. Monetary compensation is provided, of course.

Dust Town is the poorest sector of Orzammar. The old palace of the thaig used to be located here but now it is in an appalling state of disrepair and ruin and is the veritable "seedy underbelly" of the city. The reason is that it is the home of the Casteless, or "Dusters" as they are informally known, dwarves shunned by the rest of society and left to rot. The inhabitants of Dust Town have no rights and are not allowed to do work that is performed by any of the other Castes and, as such, the majority turn to crime. Those who choose a life of crime rally under the banner of the Carta, headed by Jarvia. Beyond crime, the only other means of survival are begging, "Noble Hunting" or hunting nugs.

Dust Town is a dangerous place and should an unwary outsider ever find their way in the midst of the Carta's territory, the local Dusters will feel no hesitation in relieving them of their possessions.

Dust Town is also the starting point for the Dwarf Commoner Origin. it is also home to the commoner's home. but if you travel back to Orzammar, your house is taken by the Carta.

All of the following quests are initiated, but not necessarily completed, in Orzammar itself.

These quests take place entirely outside of Orzammar, though they are filed under "Orzammar" in the journal.

While wandering through Orzammar, you will come across several pieces of Codex with regard to governing in Orzammar. Once you have collected all of them, you will receive a new quest called 'The Key to the City'. To collect the Key to the City, go to the Assembly in the Diamond Quarter and enter the left alcove. There will be a large crate here. Inside is the Key to the City accessory.

Nugbane, may be stolen (with a toolset fix) from the Mines Commander.

This item is improperly flagged as equipped, yet marked as stealable were it not for this fact. Unequipping this item from the npc through the toolset will allow it to be stolen as the stealable marker suggests it should be.

Dwarven Defender, may be stolen (with a toolset workaround) from the Captain of the Guard.

This item was never properly placed within the game, given the eventual obsolescence of crossbows and the limited amount of Sureshot Bolts, the addition of this otherwise unobtainable item has little effect on long-term gameplay.